This is the second blog post is a mini series of posts Christy and Kassia are writing about different ways to launch a hands-down conservation across math and literacy and in social conversations. Read the first one here.

I (like many people!) have learned a lot about the value of mathematical ambiguity from educator and author of Which One Doesn’t Belong? and How Many?, Christopher Danielson (@trianglemancsd on Twitter). If you know Christopher’s work, you know he likes to ask questions that have lots of possible answers and which can be accessed by people who have a wide range of experience with math. A few years ago Christopher tweeted a new question he was playing around with: Which is more? 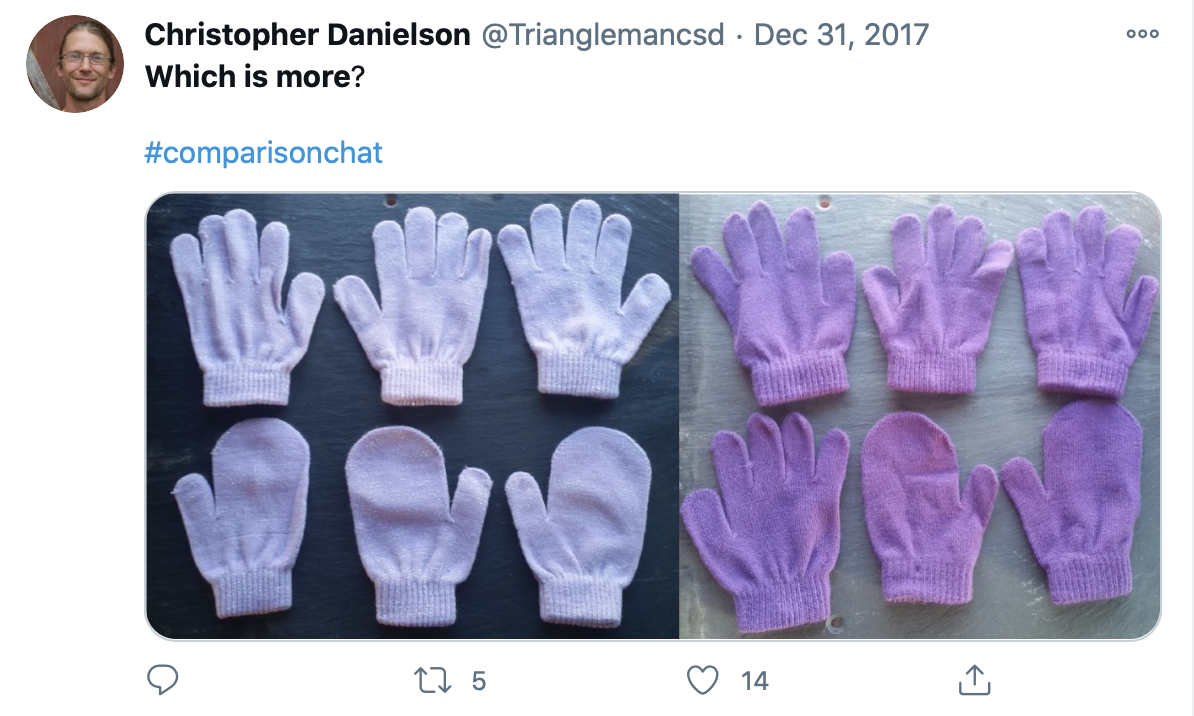 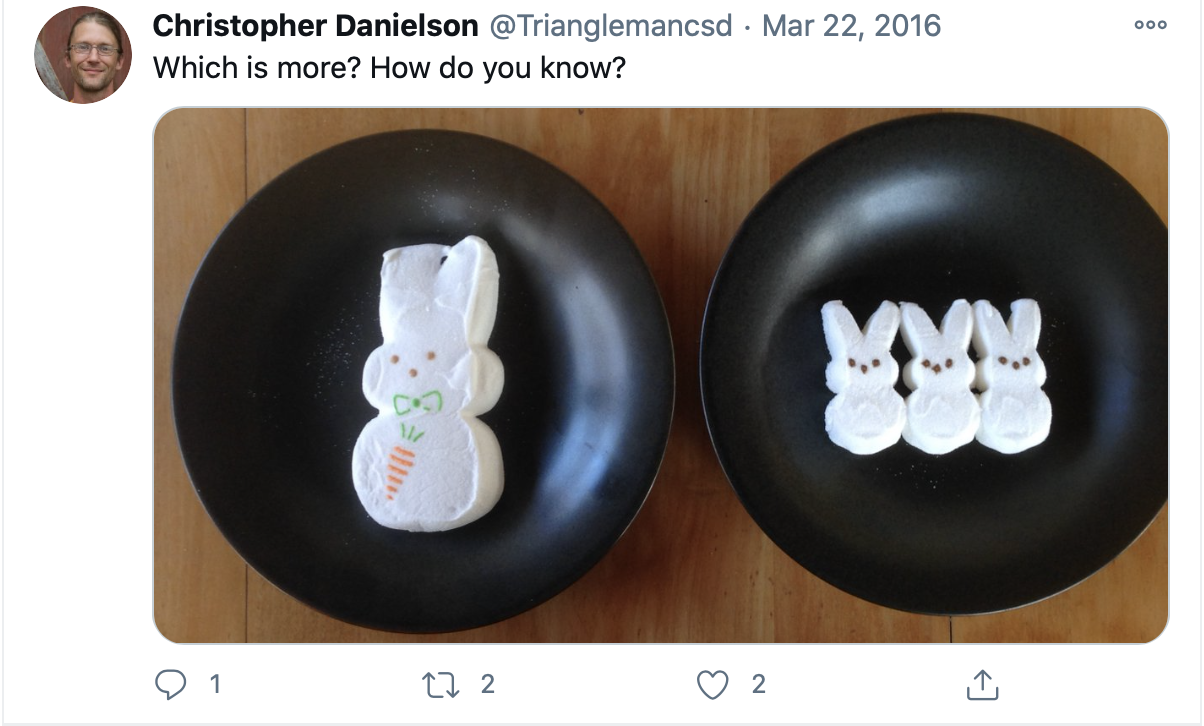 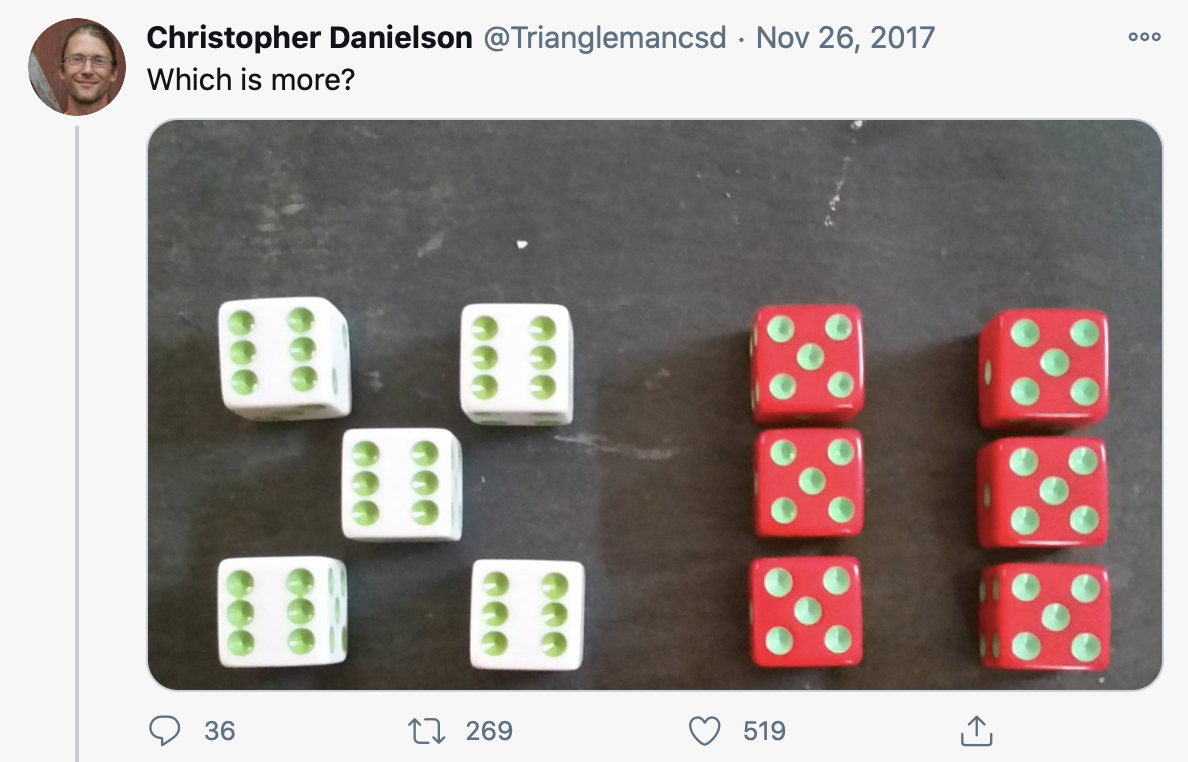 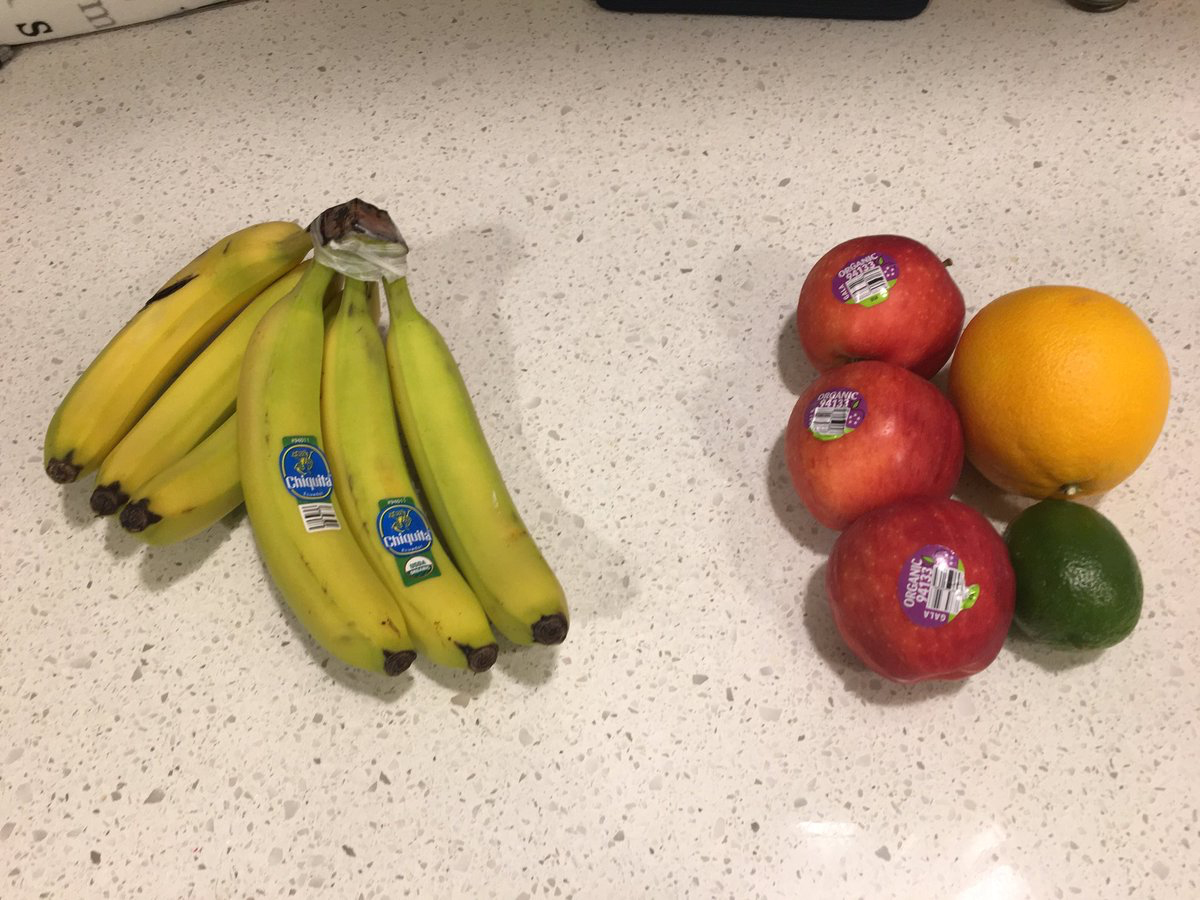 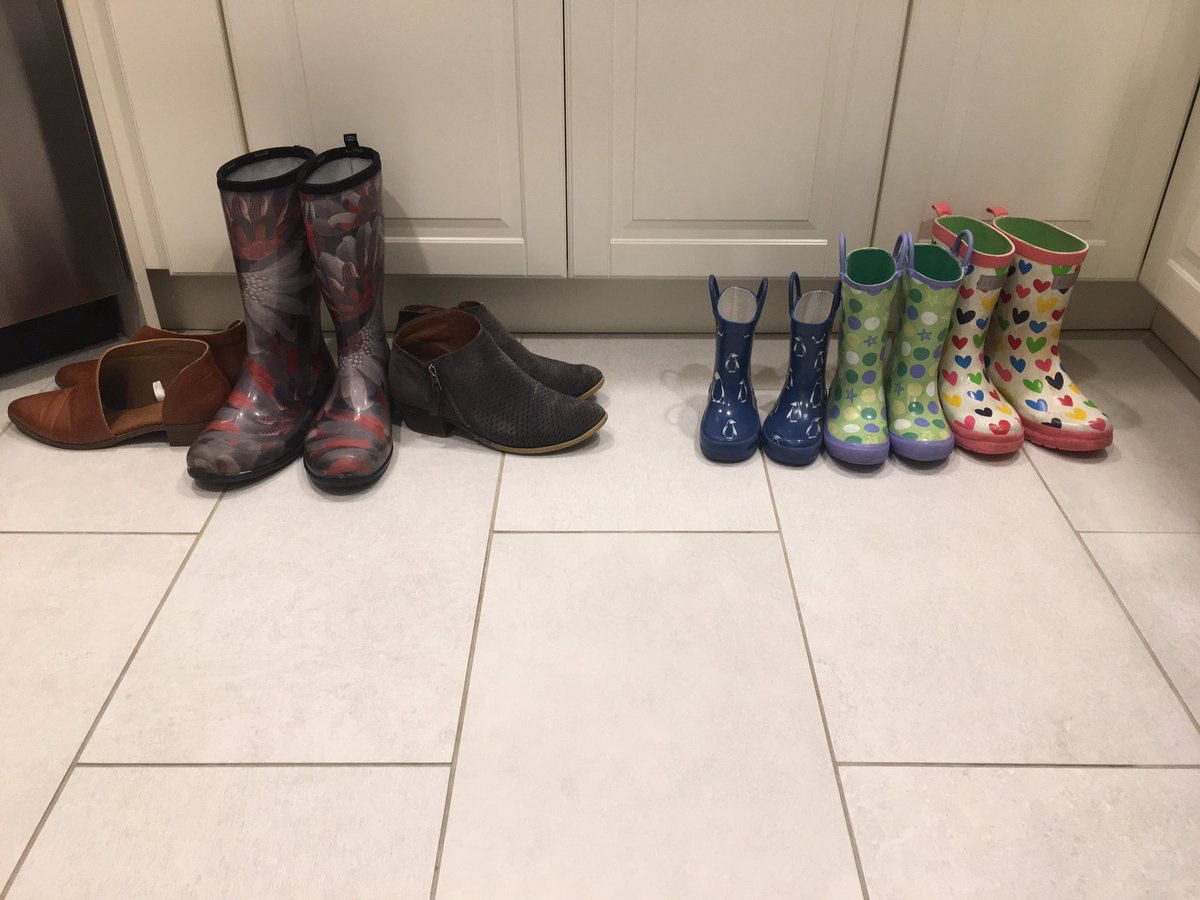 And here’s a “Which is More?” image I used in a first grade class during their study of coins (and connecting to their bigger study of place value and understanding our base-ten number system).

This image launched a delightful Hands-Down Conversation in which kids debated which cup of coins was “more coins,” “cost more,” and “weighed more” as well as how many pennies you might need in a cup to have the same value as the dime cup (“That wouldn’t even fit in the cup!”)

This year I’ve been working with some third graders in their online classroom. As they entered a unit on multiplication and division, I thought I might return to the “Which is More?” question, this time with a focus on looking at groups and arrays.

These chocolate box images are designed with a slightly different focus than Christopher’s and my earlier ones, I think. While kids can and do use the ambiguous “more” to describe the images in different ways, (“There are more red chocolates in this group!” “There are more heart chocolates!” “The chocolates are bigger, so those are more”) the images in this set have led to more conversations about the total number of chocolates. I’ve tried to avoid the roteness/closedness this task could turn into by choosing images that have ambiguity to them (I’m super happy that chocolate companies like to photograph their chocolate boxes only partially open!).

For example, many of the images I gathered juxtaposed a chocolate box organized into an array with one that was organized in a different way like this partially-closed octagonal box below.

And with this other one below students might decide that each of these very different looking boxes shows six groups of six. So, which is more? Kids always have delightful responses. Some will be the responses you anticipated and hoped for, perhaps, because they aligned with your mathematical goal. And some will be unexpected, unaligned to your goal and just as lovely. Don’t forget to marvel at those ideas too!

And with this one below we gave students time to write and draw (using Pear Deck) to justify their “Which is more?” response. Lots of kids told us what they imagined might be in that mysterious closed box!

Here’s how we’ve been facilitating these:

I think of the “Which is more?” conversation launch as falling into both of these launch categories that Christy and I discuss in Hands Down Speak Out.

You can find all of these chocolate box images on Google slides here. Feel free to use them as they are or to use them as inspiration to create your own.

A special thank you to math coach Erica Beckett (@Erica__Beckett) for co-teaching this group with me and teaching me lots about teaching online!

Have you used “Which is more?” What other launches have you used that leave room for ambiguity?

Christy (literacy coach) and Kassia (math coach) are the authors of Hands Down, Speak Out: Listening and Talking Across Literacy and Math. View All Posts

One thought on ““Which is More?” Hands-Down Conversations in the Virtual Classroom”